To keep carbon in the ground, COP21 must back agroecology 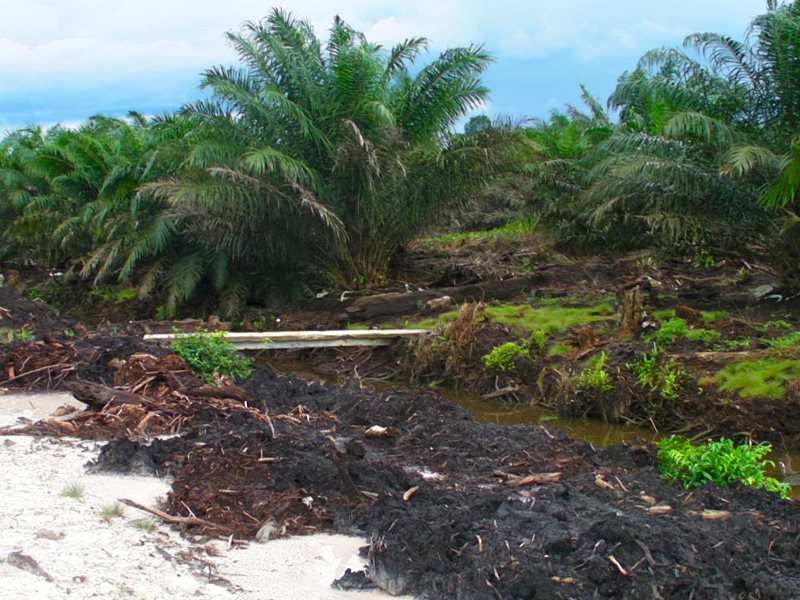 Even this could be called ‘climate smart agriculture’ – because the term is undefined. Oil palm plantations on deep peat in Indonesian Borneo. Photo: Rainforest Action Network via Flickr (CC BY-NC).

Yesterday was the last ‘negotiating day’ before Heads of State take over at COP21 in Paris this December.

The fundamental challenge for the current agreement is to build a framework that decouples economic growth from emissions. The two have been closely linked for the past 150 years.

Achieving this is no easy task and will require major shifts in our ways of doing business, but also our ways of farming. Agriculture is not only a cornerstone of the global economy and the source of the food we eat, but also one of the largest contributors of greenhouse gas emissions.

These arise from the widespread use of synthetic fertilisers, the agro-industrial depletion of once-fertile soils and peatlands, and the loss of carbon-rich biomes – forests, woodlands, wetlands, steppes and savannahs – to the destructive advance of agribusiness.

As we have seen in the recent past, price volatility and climate-infused disasters have already put us down the track towards an ever increasing risk of global food crisis.

A change in our food systems is imperative, and is already talking place across the whole spectrum of the supply chains. Young farmers and food entrepreneurs are pioneering solutions at the local level, from Greece to the Gambia.

They are fostering agroecological approaches and educating market forces to adapt to more sustainable and responsible choices. Jamie Oliver may be a superstar, but there is an entire universe of practitioners changing our food systems every day as they work their fields, and pastures.

Small-scale farmers are particularly vital for feeding the world and managing our landscapes. Given the necessary institutional and financial support, they can drive the resilient, low-carbon transitions in our agricultural systems we critically need.

But while small-scale farmers are the foundation of our global food system, leading climate action ‘on the ground’ around the world, we need to recognise their vulnerability to the spread of subsidised agribusiness and land grabs supported by venal politicians and ‘aid’ agencies – and defend them and their agroecological land management.

But do we have the regulatory, administrative and economic frameworks to do so? While those who follow the sustainable food debate may have heard about agroecology, many of the negotiators here in Bonn seem to have never heard the term.

Yet another vehicle for neoliberal colonisation?

Bolivia and a handful of allies from Latin America and Africa have become the vocal champions of this real-world solution in the climate debate. But their voices fight for attention in negotiating halls swept up in the notion of ‘Climate Smart Agriculture’ (CSA).

According to Teresa Anderson, Climate & Resilience Policy for ActionAid, speaking at Bonn Conference (see video embed, below), agrochemical corporations are actively hiding behind positive buzzwords and veiling their own emissions through the rhetoric of ‘Climate Smart Agriculture’ – in truth a “greenwashing name for fertiliser and biotech companies.”

Her biggest worry is that the CSA project will try to divert funds from the Green Climate Fund that are aimed at helping those truly ‘on the ground’. Climate Smart Agriculture, she argues, is yet another vehicle for neoliberal colonisation, clad in the sweet sounding rhetoric of a change solution.

At COP21 in Paris this December, farmers rights are well and truly at risk. If we have any chance of adapting our food systems to climate impacts, we must shift away from systems that harm, to those that allow small-scale farmers working ‘on the ground’ to cultivate and enrich the soils they know so well.

Industrialised systems only support those whose black boots allow them into big conferences like the on in Paris, but fail us all when they step into the soil.