Monsanto on trial for crimes against nature and humanity 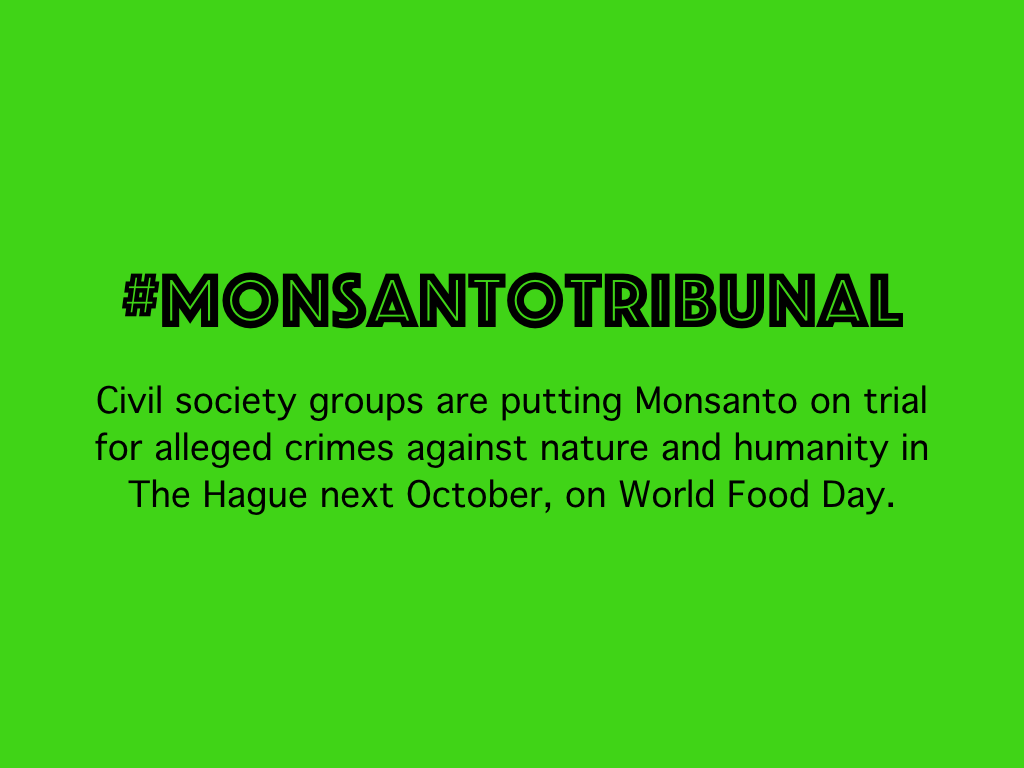 Civil society groups are putting Monsanto on trial for alleged crimes against nature and humanity in The Hague next October, on World Food Day.

The announcement of the ‘Monsanto Tribunal’ was made in a press conference in Paris this week on the fringes of COP21, by an alliance of organic, food sovereignty and environmental groups.

“It is also largely responsible for the depletion of soil and water resources, species extinction and declining biodiversity, and the displacement of millions of small farmers worldwide. This is a model that threatens peoples’ food sovereignty by patenting seeds and privatizing life …

“The Tribunal will rely on the ‘Guiding Principles on Business and Human Rights’ adopted at the UN in 2011. It will also assess potential criminal liability on the basis of the Rome Statue that created the International Criminal Court in The Hague in 2002, and it will consider whether a reform of international criminal law is warranted to include crimes against the environment, or ecocide, as a prosecutable criminal offense, so that natural persons could incur criminal liability.”

Monsanto Tribunal standing committee members – including Vandana Shiva, Corinne Lepage, Marie-Monique Robin, Olivier de Schutter, Gilles-Eric Séralini and Hans Herren – will invite witnesses to testify on how Monsanto has allegedly corrupted the political system and the mass media and resorted to unethical and criminal tactics to reach their present state as the leader of the genetic engineering industry.

As they put Monsanto on trial, the groups hope that this will serve as a lesson to all big corporations that keep putting profits over the people and the planet. The are also aiming to unite communities from all over the world at the grassroots level.

There is a real reason why Monsanto is, say its critics, the most hated corporation in the world. They consider the company to be the ‘poster boy of evil’ through the pesticides they produce, especially their signature product, glyphosate.

André Leu, an Australian organic farmer who is the President of IFOAM, the International Federation of Organic Agricultural Movements, said: “For years, RoundUp was regarded so safe, you could drink it. Regulatory authorities said we do not need to worry about. They did not even test for it in our food.

“It has been sprayed on the roadsides, in children’s playgrounds, and all over the environment, in our waters and our air. And yet we now have hundreds of published peer-reviewed studies showing that this is probably the most dangerous agrochemical ever.”

“The time is long overdue for a global citizens’ tribunal to put Monsanto on trial for crimes against humanity and the environment”, said Ronnie Cummins, Director of the Organic Consumers Association, adding that Monsanto’s GM crops are engineered to drive demand for dangerous pesticides and herbicides such as glyphosate, 2,4-D and dicamba:

“They are nothing more than literal poison for the public, and it is only through their control and manipulation of politicians, the media and the banks that allows them to be established as the largest player in the agribusiness.”

It is because they behave like this, he explained, that people start to realise that these corporations have no problems to poison their children, their grandchildren, themselves and the environment just to increase their profits.

As negotiators and civil society observers agonise over the wording in the draft documents that will lead to the Paris Agreement, the actual thing that needs to happen after the COP21 is to do the real work. In broad view, this means two things. One is to stop emitting carbon into the atmosphere. The other is to take the excess out of it.

By launching the Monsanto Tribunal campaign during COP21, civil society groups and grassroots movements aim to expose the corporate control of the agrifood system and its ways of compromising real action for climate change adaptation and mitigation.

They also wish to highlight their role behind the ‘climate smart‘ language that dominates discussion on food security and land use in COP21. While governments are negotiating at the Le Bourget conference centre, said Vandana Shiva, it’s essential to show them that we are watching:

“The answer lies in scaling up the regenerative forms of agriculture, not extractive ones that are based on greed and ecological injustice. The most efficient way for taking carbon out of the atmosphere is to put it in the soil by building resilient, productive and healthy farming systems.”