Give Greece a Chance 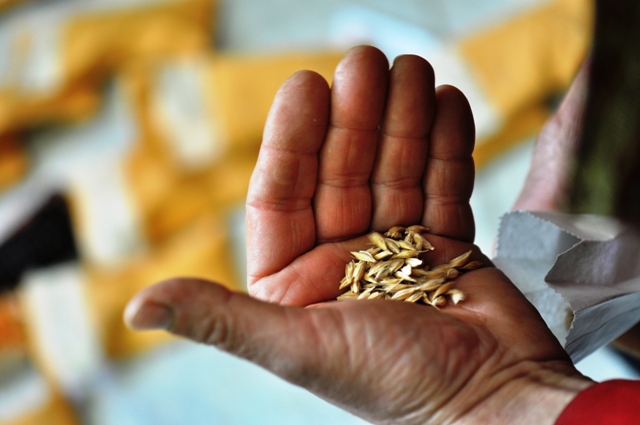 Recent media reports on Greece have been dominated by images of civil discontent and unrest.  As the country enters its fifth consecutive year of depression, the most severe since the Second World War, I rediscover another Greece.

The Greece of corruption and inefficiency, you hear so much of in the media is far removed from the Greece that I know. My country has historically been, and continues to be, a place of creativity, altruism, civilisation, hard work and thought. As household incomes decrease, resourcefulness is on the up and as the economic crisis hits home, the Greek people are once again looking to the country’s natural assets.

Greece’s  rural and agricultural history is unique. We have a range of micro-climates and a unique agro-biodiversity in which virtually any crop will grow. The Greek peninsula represents an important centre of crop diversity, and has been the bread-basket of European evolution since ancient times. Fava beans from Santorini for example, have been cultivated since 3500 BC, and the grains of selected wheat varieties can be found on prehistoric archaeological sites in northern Greece, dating back over 9000 years. With this in mind, the Greek people have much more heritage to protect than simply ancient ruins.

Despite the potential of our land, Greece now imports the majority of its food and on average we are the second most obese people in the EU. These abnormalities are largely attributable to the EU’s Common Agriculture Policy, which has supported the growth and development of a very narrow range of large-scale monocultures, almost entirely for export purposes. The failures of the CAP have had a profound effect not only on our food culture and agricultural skills, but also on the landscape of the country. In just three decades, Greece has lost most of its local agricultural varieties and almost all of its dry land, low-input agriculture was pushed out of the market. In Crete, a large number of two-thousand-year-old olive trees were turned into firewood, within a very short period of time.

But there is change in the air, driven forward by the dynamism that is born of a people in crisis, albeit through a small, fragmented minority of interested young entrepreneurs. Younger generations are becoming more aware of the provenance of their food and have a renewed interest in the land, with great numbers of post-graduate students relocating to rural areas. Greek youth bring with them university degrees, the command of several languages and the knowledge and willing to harness the potential of digital technologies for agricultural innovation and productivity.   Their work to create a knowledge-based agricultural and rural sustainability sector is beginning to show despite the current economic stagnation. The first steps were made visible by the “potato movement” harnessing the potential of volunteer action and online marketing to expose the abnormalities of food distribution and the perverse role of middlemen in the domestic market. Social enterprises like Gine Agrotis (Become a Farmer) are using web-platforms in order to directly link young organic farmers with conscious consumers all over Greece, organizing CSA systems and green-box schemes. A large number of seed keepers and breeders from every corner of Greece are conserving and exchanging seeds from old, traditional crop varieties through a network called Peliti. And non-profits like Organisation Earth in Athens are working with educating children, aiming to develop a better environmental and social mentality. The role of Slow Food is also important in creating collaboration and promoting our activities.
A renewed focus on social values around food is not only about uniting people in an attempt to revamp the economy. Together these efforts are helping to shape a new identity for Greece, one that is founded in principles of equality, collaboration, entrepreneurship and pride in our culture and heritage.  The challenge is great and much will depend on whether we resist ongoing speculation over the country’s lands and resources, and a new native mentality that has grown to depend on the consumption of imported commodities. From its sun-drenched coasts to its noble mountains, the small crisis-stricken country of the European south will not cease to represent land, sea and sun –all vital elements of nature and food.
My Greece is full of promise, solidarity and spirit, and it is up to the young generation to decide whether we will continue as an over-consuming nation, or if we will productively work together to create a better future.
Article originally published at: www.sustainablefoodtrust.org