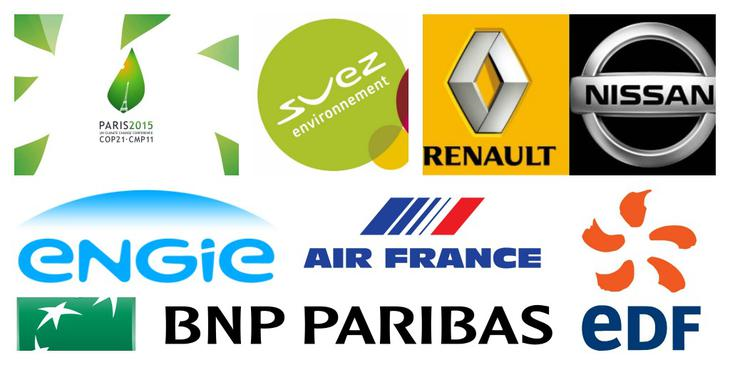 Can COP21 succeed? Not to judge by its corporate sponsors. Just four of the dozens of sponsors of this year’s UN climate negotiations are collectively responsible for more than 200 million tonnes of CO2emissions worldwide.

A new report by Corporate Accountability Internationalhighlights that European energy giants Engie, Électricité de France (EDF), Suez Environnement and the bank BNP Paribas collectively own more than 46 coal-fired power plants around the world, including investments in oil sands exploration in Canada and fracking for shale gas in the UK.

This has raised serious concerns ahead of the UN conference as to the role that corporate lobby groups should have, as many feel that this direct financial interest goes against the moral focus of the negotiations.

Patti Lynn, Executive Director of Corporate Accountability International noted that the decision to allow these large polluters to sponsor the conference is “akin to hiring a fox to guard a hen house.” She also argued that the UN climate negotiations is at risk of becoming a “corporate trade show for false market-based solutions.”

The report not only highlights the public behaviour of many of these companies, but also what they do behind the scenes to interfere with political decisions. Earlier this year, ExxonMobil was famously outed for having suppressed knowledge of their role on contributing to climate change for the past 30 years.

It appears that the top COP21 sponsors have similarly questionable records on their lobbying practices to undermine environmental policy around the world.

While EDF claims to be “committed to a decarbonised world”, it is an active member – alongside ExxonMobil and Shell – of BusinessEurope. This group has been linked to openly opposing the “market deployment of energy produced from renewable sources” across Europe.

Featuring 30 coal power plants worldwide, the ‘sustainable’ energy portfolio of Engie includes gas extracted via hydraulic fracturing and an aggressive expansion of its investments and exploration in fracked gas.

Despite recent announcements to stop new coal projects, the sponsoring energy giant directly profited from more than 131 Mt of greenhouse gas emissions in 2014. That is equivalent to the pollution emitted from driving a car around the globe 12 million times.

BNP Paribas, also a COP21 sponsor, continues to be a massive financial driver behind fossil fuel expansion globally. For almost 50 years, it has been behind Canada’s tar sands extraction. It is now one of the largest coal financiers in France, having provided half of the total financial support (€15 billion) for the country’s coal industry between 2005 and 2014.

The same music goes for supporting companies exploiting other natural resources. The water delivery segment of Suez Environnement’s business is increasingly focused on water-stressed areas of the world, suggesting it aims to profit from this scarcity.

It is in those very regions where the fossil fuel lobby is advancing the idea that we need to create large centralised infrastructure for dirty energy.

Before we start reflecting on the climate negotiations, as citizens we need to stop looking at them only through the silos of ‘adaptation & mitigation’, ‘equity’, ‘loss & damage’ and so on. What we need is to start looking at the process deciding what we are trying to achieve and how we are going to accomplish it.

It is a conflict of interest to have any entity that depends so much on fossil fuels and whose business is so emissions intensive, to be paying for a negotiation that is seeking solutions and a path away from those business models.

With all those large political forces coming into play, it is important to recognise that walking through those doors, the international climate talks have potentially already been compromised by those dollars exchanging hands.

This absurd combination of ‘back-door lobbying’ and public pollution is why Philip Jakpor from Environmental Rights Action Nigeria, argues that we need to “protect climate policy making from those who wish to undermine it.”

Future climate policy-making must be free of big corporate interests through directly disallowing large contributors to climate change from the policy-making process. Something similar happened a decade ago, when big tobacco was kicked out of international health talks.

Polluters out! People in!

In May, more than 60 organisations launched a global campaign to do just that. The campaign called to kick big polluters out of climate policy and has more than half a million signatories so far.

This is just another example of civil mobilisation trying to push out of the way those who created the problem in the first place. And to be perfectly honest, are not the ones who are offering the solutions that the planet needs to see.

What we should expect from Paris is to identify, support and add value to the real solutions that make most sense for people and the environment. Obviously, we cannot do that with big industry lobbies calling the shots behind closed doors.

We need people making decisions for people but, unfortunately, we have moved very far away from that. Now is the time to get back in track, kicking corporate interference out of the negotiators’ way.