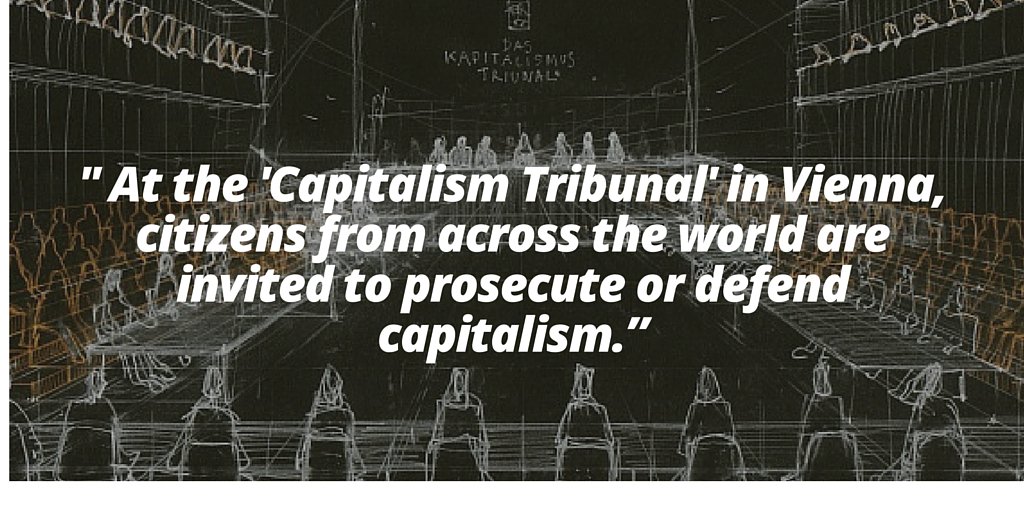 On the aftermath of the leaks related to the Panama Papers and the secretive TTIP negotiations, an important dialogue is maturing in Europe, with respect to the past, the present and the future economy.

Many voices are now openly challenge the Union’s neoliberal model, as they witness capitalism’s great unkept promise to make life better for everyone. The current political dynamic is fuelled by a sense that activities stemming of the current mainstream economic system, pose a direct threat to the survival of our and other species.

The Capitalism Tribunal, that takes place in Vienna these days, is yet another sample of this dialogue, looking for answers to the critique against the system. It is a virtual, though fair and open tribunal, based on 250 charges submitted online since 1 May, 2015.

Citizens from all over the world were invited to prosecute or defend capitalism. The charges are now transferred from the digital sphere to physical space, in a real trial. This first tribunal investigates cases against European capitalism related to labour, property, education, the media, institutions and the planet’s ecosystems.

Can the economic system influencing the lives of billions of citizens be criminal? Is it guilty or innocent? Does it support or undermine healthy social progress?

These are the questions that the jury is trying to answer, on the basis of a coherent methodology that examines several cases against legal entities (ie. a corporation of government body), individuals or a particular civil code. Two committees, one prosecuting and the one defending each charge, analyse and debate. An experienced judge presides over the tribunal, which will decide on the legitimacy of the charges.

According to Alix Fassmann, who has co-organised the project, the tribunal is based on the assumption that the cases under examination are controlled by certain legal rules. “These are not just accusations, but we are trying to create a dialectic atmosphere to analyse case-specific arguments against and for capitalism. The verdict of this fair tribunal will attempt to better understand what should not be part of the future economic system”.

The leader of the prosecution team, Hendrik Sodenkamp, claims that it is the very economic system of capitalism to be blamed, which stems from private property and aims to capitalise profits from anything. “The environmental destruction and the dire situation that millions of people are going through all over the world, are direct results of the economic system in which we are obliged to live”, Sodenkamp says.

While for Dr. Luis Klein, leader of the defence team, “by blaming everything on the economic system itself, we are risking to overshoot all the rest of factors that emerge after a deeper look in each of the cases we are analysing in this trial”.

The first tribunal lasts 7 days. The court will issue its decision and, where the verdict constitutes guilt, will impose sanctions. Although these are not legally binding, the results will be published extensively, encouraging debate and promoting a much-needed policy debate on the future economy.