Paris is just the beginning for climate action

In the past 18 months climate change has been hitting the headlines. With record heat waves, fires and drought across the globe, melting Arctic sea ice, dramatically warming seas and shifts in jet stream and ocean circulation, there is much to be concerned about. Now, with less than 100 days to go until the Paris Climate COP, climate change is well and truly back on the global agenda. The awareness, mobilisation and extent to which governments, corporations and civil organisations are committing to act against global warming is accelerating on a much larger scale than was seen before the last major UN Framework Convention on Climate Change (UNFCCC) in Copenhagen, in 2009. 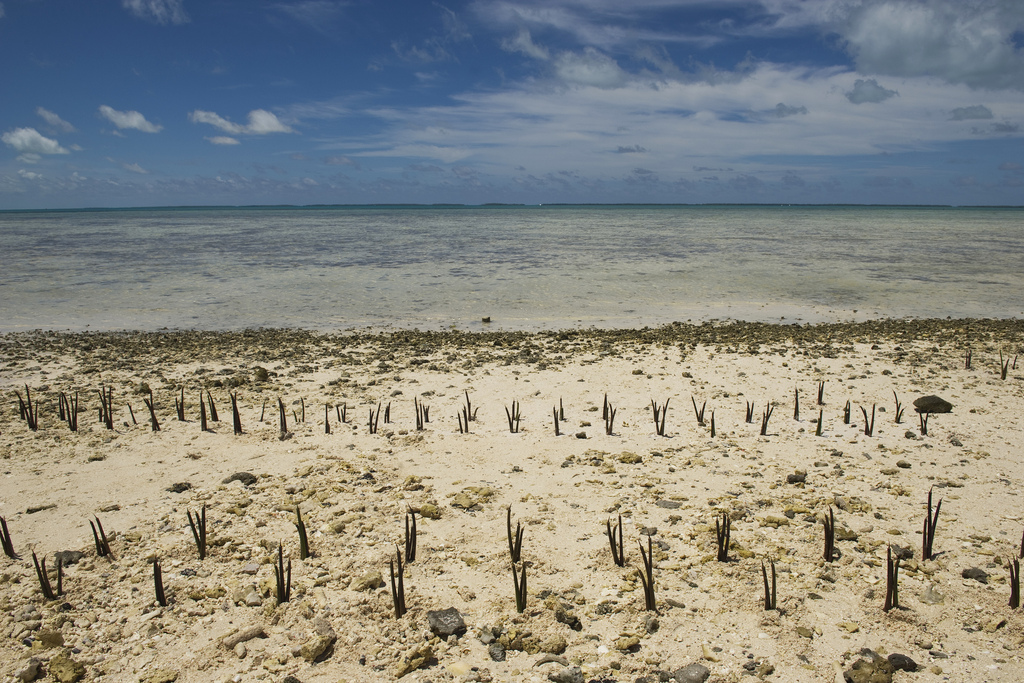 A view of mangrove shoots planted by Secretary-General Ban Ki-moon and others on Tarawa, an atoll in the Pacific island nation of Kiribati. Credit: United Nations Photo

On their way to reaching a new international climate agreement, many governments are already taking steps in the right direction. These actions, which mainly take the form of Intended Nationally Determined Contributions (INDCs), outline the post-2020 actions that countries plan to take in order to ensure a low-carbon, climate-resilient future. At the moment, many of the policy propositions being put on the table are ‘business as usual’ and largely incremental. Governments plot out their projected economic growth over the next few years and set baselines according to this projection, not to current levels of economic activity. However, it is difficult for many countries to estimate such baselines, since growth rates are often unpredictable. These projections remain a topic of controversy, as governments opt for targets that suit them and avoid raising their ambitions. The EU, for example, has pledged to reduce domestic emissions by at least 40% by 2030 – but against a 1990 baseline. Another interesting example is China, which wants to peak – not reduce – its emissions by 2030.

The complexity of negotiations over the INDCs is made more difficult because of a lack of consistency in the content of the commitments, with different countries interpreting their goals in different ways. Some countries, such as Mexico and Serbia, along with many developing countries, have included sections about adaptation to climate change in their INDCs – including, for example, what kinds of policies are required to protect citizens from rising sea levels. Further, some developing countries have included conditional elements, in which they commit to a certain target but pledge to deliver more if other development indicators are met or new technologies are in place. Some commitments are binding: the EU has made an unconditional commitment to cutting emissions by 40%. And others are a surprise: Japan, for example, which has included details about what its energy mix will be in 2030, actually left space for more coal and nuclear expansion.

Every country wants to see strong action on climate change, but the Paris Climate Conference will be pivotal in defining certain indicators and metrics to show whether a country is doing its equitable bit in this direction. What a country commits to doing in the INDCs depends on the state of its financial strength. For example, you cannot expect Bangladesh to comply with the same or similar requirements as the United States. Nevertheless, the Marshall Islands, a very small, developing country, stands out in the crowd with its strong commitment to meet specific targets and detailed plans of how it will reach them and how it will assess its emissions. This small nation is joined by Costa Rica in committing to zero emissions by 2050. By contrast, Russia’s commitment is rather ambiguous, drafted in contradictory language and requiring a deep knowledge of government dynamics to understand how it might meet its targets.

A few countries have had rounds of consultations with civil society organisations in order to identify and draft their post-2020 climate action proposals. The government of New Zealand received 17,000 written submissions from citizens over a month’s period – not bad when compared to the country’s total population (about 4.6 million). Japan and Brazil also had a period of consultation, but it is not clear whether these governments took into account the opinion of their citizens in drafting their commitments. In the Philippines, the climate consultation was reported to be lacking in transparency, leaving vulnerable voices out of the process. And in the EU – which claims to be a great leader on climate change – no such process of public deliberation has taken place to date.

Discussions for the UNFCCC have focused predominantly on the mitigation of climate change, but the elephant in the room is adaptation, often seen as an orphan child in these dialogues. The INDCs and the level of temperature reductions they commit to (roughly between 3 and 5 degrees Celsius) overlook the fact that we are not even remotely prepared to adapt to such a global temperature rise. What is needed at the Paris Climate Conference is a set of policies that transforms the way we think about adaptation to climate change and incorporates this thinking into everything we do. In this context, there is still an awful lot to play for in the lead up to the conference and beyond.

All these commitments are moving us towards a safer climate, but we are still far from what the scientists say is required: the phasing out of fossil fuels and the reduction of our greenhouse gas emissions to zero by 2050. What we have to do now, and in the next few years, is to create what UNFCCC Executive Secretary Christiana Figueres calls a “surround sound system”, where no matter what sector you turn to, the message is “Folks, we are moving toward a low-carbon economy. It is irreversible; it is unstoppable. So get on the bandwagon.”

We have come a long way in building that sound system, and it’s growing. Now is the time to turn up the volume.