Kumi Naidoo: let the youth be our climate leaders! 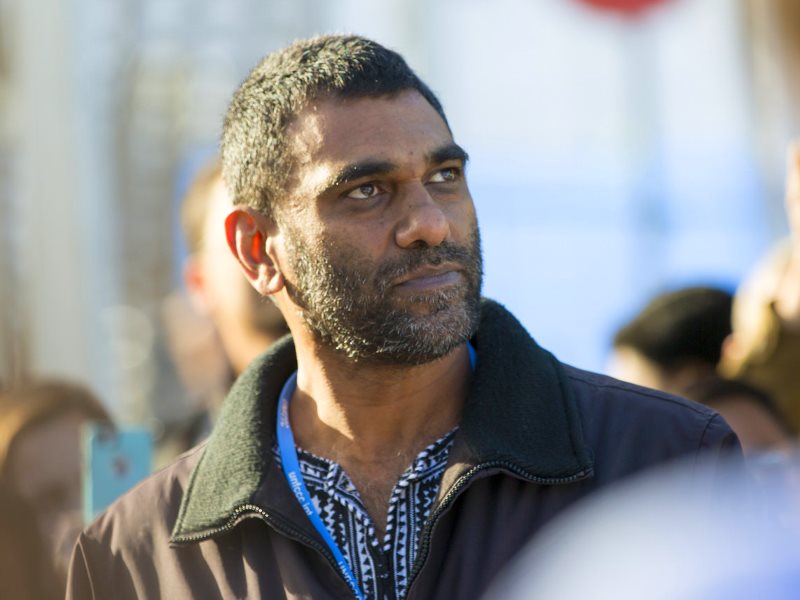 Kumi Naidoo was born in South Africa, and became involved in the country’s liberation struggle at the age of 15. His early community work and anti-apartheid activity led him to exile in England, until Nelson Mandela’s release in 1990.

Naidoo, now International Executive Director of Greenpeace, was at COP21 to join his voice with thousands of climate activists, encouraging citizens to rise up for a renewables revolution.

Dressed in traditional South African attire, Kumi welcomed me with a strong handshake, his deep voice projecting both hope and scepticism.

“The good thing about COP21 is that for the first time we have a great multilateral agreement to address climate change. This is the first time such a large number of countries agree on something, since the adoption of the Universal Declaration of Human Rights (UDHR) in 1948, again in Paris.

“The sad thing about it, is that for 21 years, we knew about the need to address climate change. But our political leaders have been in denial about how serious the problem is.”

For Kumi, governments dragged their feet in these talks. “The Paris Agreement is only one step on a long road, and there are parts of it that frustrate and disappoint me, but it is progress. This deal alone won’t dig us out the hole we’re in, but it makes the sides less steep.”

In his view, the most crucial work begins now, and is important to see what types of action will emerge in the next weeks and months after Paris.

Climate finance is not a charity

Despite delays and conflicting opinions, at the end governments came up with the $100 billion support towards climate action. “They fudged the language here and there, but they had no other choice. If developed countries did not deliver on that, poor countries would not sign on to anything unless they got a guarantee that they are going to have predictable and transparent sources of funding.

But if you divide these $100 billion by the number of beneficiary countries, then you realise that is not any close to what is needed. When we are talking about climate financepoor countries are not really asking from rich countries to give them a donation or charity. They are telling them that since they have built their economies on the basis of carbon, they should now recognise their climate debt.”

“We now face the challenge of not allowing our governments to let us down, and that civil society – especially in developing countries- is part of the process that ensures this money is spent properly.”

It took 20 years for the world to reach this agreement, because of a reality that Kumi calls a “climate apartheid”, that showed its teeth in the Paris negotiations too:

The challenge of financing climate action after Paris is immense. Naidoo believes that the aid system is a very messed up broken system, to start with:

“For every one dollar that is given to Africa, eight dollars are going out in capital flight. Therefore, it is important that the Green Climate Fund is set up in a way that takes that injustice into consideration. We cannot allow the current messed up banking system consume the world’s most vulnerable countries, that need funds to protect themselves from catastrophic climate change.

“A country like Kiribati, for example, that has contributed almost nothing in terms of carbon emissions, has very high possibilities that parts of it will disappear in the coming decades. Lending institutions will say that if Kiribati wants to borrow money in the international markets, it must pay higher interest rates, because the country’s ‘vulnerability’ is a threat to the credit system.”

This exact case, highlights the big injustice existing in climate finance right now, where loans could leave all these countries back in a deep, unplayable debt situation. “But, why go to Kiribati, when there is Greece, a country you could get from Paris on a bicycle, to see it for yourself”, Naidoo says.

“We have to be very careful whether the mechanisms agreed in Paris will put poor countries in a kind of a terrible debt situation. Otherwise, they could be enslaved to financial institutions for many decades to come.”

Kumi Naidoo believes that the COP21 is just the beginning of a long road. “It sometimes seems that the countries of the United Nations can unite on nothing, but nearly two hundred countries have come together and agreed a deal. The human race has just joined in a common cause, but it’s what happens from now on that really matters.”

“Our political and business leaders must realise that nature does not negotiate. They have to realise that the agreement that was just signed is about their children and their children’s children’s futures. And for that reason, we cannot but recognise that in the moment of history that we live in, this is an one-way all of us. Especially young people need to stand up and say ‘this is about our future!'”

“The world is now on its feet and more determined than ever, continuing the fight and pushing the transition from an economy that is driven by dirty fossil fuels, to an economy that is driven by clean energy”, he continues. “As humans, we cannot afford this transition to be slow and wait until tomorrow. Because by tomorrow, there might be no tomorrow.”

In his words, climate change presents us with a very powerful opportunity. “For far too long, we lived in a world divided between rich and poor, north and south, east and west, developed and developing.

“What we need right now is not just baby steps in the right direction, given how much time we have already lost. We need substantial, structural, systemic change. And this change can only be led by the youth, who are not infected by the political pollution of the past”.

“Either we secure a future for all our children and grandchildren, or we can get it wrong. Poor countries, that have contributed least to the problem, will pay the first and most brutal price. But, ultimately, everybody will get impacted.”

Originally published at The Ecologist.